The foundation for the information presented on this website is our living systematic review with network meta-analysis. On this page we present the methods and catalogue the findings of our review.

Our baseline analysis was published in JAMA Dermatology in April 2020.

The protocol for our network meta-analysis was published in BMJ Open in August 2018.

Want to learn more about network meta-analysis? Check out this Research Techniques Made Simple paper in Journal of Investigative Dermatology.

On March 18, 2021 we uploaded data from our Oct 2020 search! This includes new data for the investigational biologic medications tralokinumab and nemolizumab and JAK inhibitor baricitinib.

On September 10, 2020 we uploaded data from our June 2020 search! This includes new data for the investigational biologic medication Lebrikizumab.

On June 30 2020 we uploaded data from our February 2020 search! This includes new data for investigational drugs baricitinib and abrocitinib.

Updated searches are performed every 4 months.

We search the Cochrane Central Register of Controlled Trials (CENTRAL); MEDLINE via Ovid (from 1946); Embase via Ovid (from 1974); Latin American and Caribbean Health Science Information database (LILACS) (from 1982); and the Global Resource of EczemA Trials (GREAT) database. We also perform searches of the following trials registers: the ISRCTN registry; ClinicalTrials.gov; the Australian New Zealand Clinical Trials Registry; the World Health Organization International Clinical Trials Registry Platform (ICTRP); the EU Clinical Trials Register. For our baseline review, we searched all databases from inception until October 28 2019. We hand-searched reference lists of relevant publications retrieved as full papers and relevant systematic reviews and literature reviews to identify other eligible studies. The full, updated search strategy can be found in the supplement that can be downloaded from this site under Peer Review Publications above. We searched for supplemental results on trial registries and contacted study authors and pharmaceutical companies to obtain further data. For logistical reasons we only include studies published in English.

We include studies based on the following eligibility criteria:

Population: Children and adults with moderate-to-severe AD. We applied no age or sex restrictions.

Comparator: Any, including placebo.

Study design: RCTs of ≥8 weeks of therapy, including ≥2 doses of medication. We include studies with systemic immunomodulatory therapies as monotherapy or in combination with topical therapies. We do restrict type of RCT, but for crossover RCTs, we only included outcome data pre-cross-over.

We screen titles and abstracts independently in duplicate. Any citation identified by either of the screeners as potentially relevant is advanced to full text review. Two independent investigators then screen full texts for inclusion; any discrepancies are resolved by discussion between the two screeners and, when necessary, with a senior member of the review team.  All screening and data abstraction is done in pairs (two of AMD, ZY, MB, SM or DM).

We categorize the use of concomitant therapy by whether topical anti-inflammatory treatments (e.g., corticosteroids, calcineurin inhibitors) is permitted. For studies where patients use topical medications as “rescue” therapy only and are subsequently excluded from the trial, we categorize the study as not allowing topical therapy. For each outcome, when available, we extract data for short-term (≤16 weeks) and long-term (>16 weeks) time points. Within each short- and long-term period, we extract outcome data at the latest reported endpoint during active treatment. We define active treatment duration as the time from baseline to the last administered dose plus the interval between doses (e.g., if a medication is given every 4 weeks and the last dose is given at 12 weeks, the active treatment duration is considered 16 weeks). For studies where safety outcomes are reported only after an off-treatment monitoring period, we assign those results to the active treatment timeframe so that our analysis reflected the treatment exposure (e.g., for 16 weeks of active treatment with safety follow-up reported at 24 weeks, we consider that safety data to pertain to 16 weeks of treatment). Studies where the analytic population for an outcome differs from the baseline population, and baseline values for the outcome measure were only provided for the baseline population, we used that baseline value.

We perform network meta-analysis for each outcome using a random-effects model within a Bayesian framework using the gemtc R package.  We include random effects on the treatment parameters, which allows each study to have a different but related treatment effect. The between-study variance (heterogeneity) is assumed to be constant for every treatment comparison. We use non-informative prior distributions for efficacy model parameters given current uncertainty of the relative effectiveness of the treatments. Because of the sparseness of data for withdrawals and serious adverse events, we conduct analyses using a more informative log-normal prior for the heterogeneity parameter (Turner et al. Stat Med. 2015;34(6):984-998). Specifically, we assume a reasonable bound would capture the treatment effects, as in the context of pharmaceutical interventions, it is very unlikely that an OR will be greater than 30 or less than 1/30 (Golder et al. PLoS medicine. 2016;13(9):e1002127). Hence, we use a normal prior on the log odds ratios such that the 95% coverage includes log(1/30) to log(30). We assess convergence of 4 chains by the Gelman-Rubin statistic and visual inspection of trace plots. We planned to assess coherence (also called consistency) by comparing the direct and indirect evidence using a node-splitting approach (Dias et al. Stat Med. 2010;29(7-8):932-944). However, the geometry of our networks, particularly the paucity of head to head trials, precludes planned evaluations of consistency at this stage. Once sufficient evidence is available to evaluate consistency, we will do so in future updates of our NMA.

We planned to pool studies of 8-16 weeks of treatment separately from studies >16 weeks of treatment and studies of children separately from studies of adults. Studies who population includes both adolescents and adults (age 12 and over) and where data stratified by age is not available are analyzed with the adult trials. A paucity of long-term and pediatric trials to date limits analyses to short-term trials in adults. A general rule of thumb is to have at least the same number of studies as treatments (e.g., a minimum of 3 studies in a network with placebo plus 2 active treatments). We plan to perform analyses with for children and for long-term data once this criteria is met.

For medications studied at different doses, we treat each dosing regimen as its own network node so that sub-optimal doses in early trials do not bias the effect estimates for doses ultimately used in practice. Within each outcome domain, we analyze each scale separately when there were sufficient data. In separate analyses, we combine all scales within each outcome domain using standardized mean difference. For these analyses, we interpreted summary effect estimates <0.2 as small, 0.2-0.8 as moderate and >0.8 as large (Cohen J. Statistical power analysis for the behavioral sciences. 2nd ed. Hillsdale, N.J.: L. Erlbaum Associates; 1988).

We generate network plots for each analysis. Summary results are presented as mean difference, standardized mean difference, or odds ratio with 95% credible intervals (CrI).  Treatment rankings are summarized by the Surface Under the Cumulative Ranking (SUCRA).

We conduct subgroup analyses separating trials that allowed vs did not allow concomitant topical anti-inflammatory therapy.

We perform secondary analyses including only treatments currently in widespread use; these analyses were not planned in our protocol but we feel they are clinically relevant. Treatments in widespread use include the labeled adult dosing of dupilumab (600 mg x1 then 300 mg every 2 weeks), lower (≤3 mg/kg/day, 150 mg/day) and higher-dose cyclosporine (>3 and up to 5 mg/kg/day, 300 mg/day) and various similar azathioprine and methotrexate dosing regimens. In future updates, as more treatments become available in clinical practice, we will expand this analysis to include more treatments.

Risk of Bias and Certainty of Evidence

We assess the risk of bias in individual studies using the Cochrane Risk of Bias tool (Higgins et al. BMJ. 2011;343:d5928). Assessments are done in duplicate; discrepancies are resolved by discussion between assessors.

We assess the overall quality of evidence for each outcome and comparison using Grading of Recommendations Assessment, Development and Evaluation (GRADE) criteria for the network meta-analysis estimates (Brignardello-Petersen et al. Journal of clinical epidemiology. 2018;93:36-44 and Puhan et al BMJ. 2014;349:g5630).

The research plan was developed by dermatologists, AD patients, methodologists and an information specialist. We registered a protocol in PROSPERO (CRD42018088112) and published it in full. After the publication of the protocol but prior to data analysis, we decided to exclude studies with treatments given only as a single dose, with active treatment <8 weeks, with a run-in period that included use of a systemic immunomodulatory agent or when results were only available in a clinical trial registry for studies terminated early of medications not approved. These changes were made to improve homogeneity and decrease intransitivity.

After publication of the protocol, we established an update frequency of 4 months based on published guidance (Crequit et al. Journal of clinical epidemiology. 2019;108:10-16).

For questions about our statistical code, please contact us at eczematherapies@wchospital.ca

In our October 2020 search, we added 5 new eligible studies. There are a total of 50 studies now included in our review. 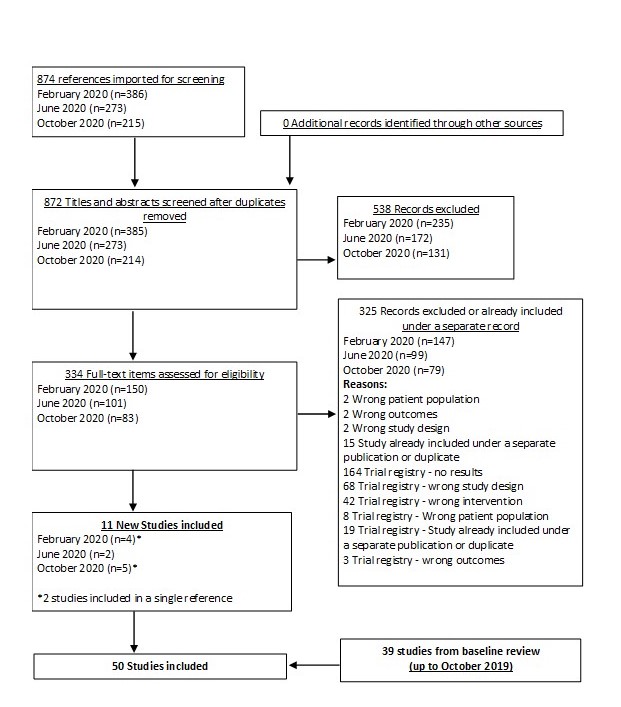 In our June 2020 search, we added two new eligible studies. There are now a total of 45 studies now included in our review. 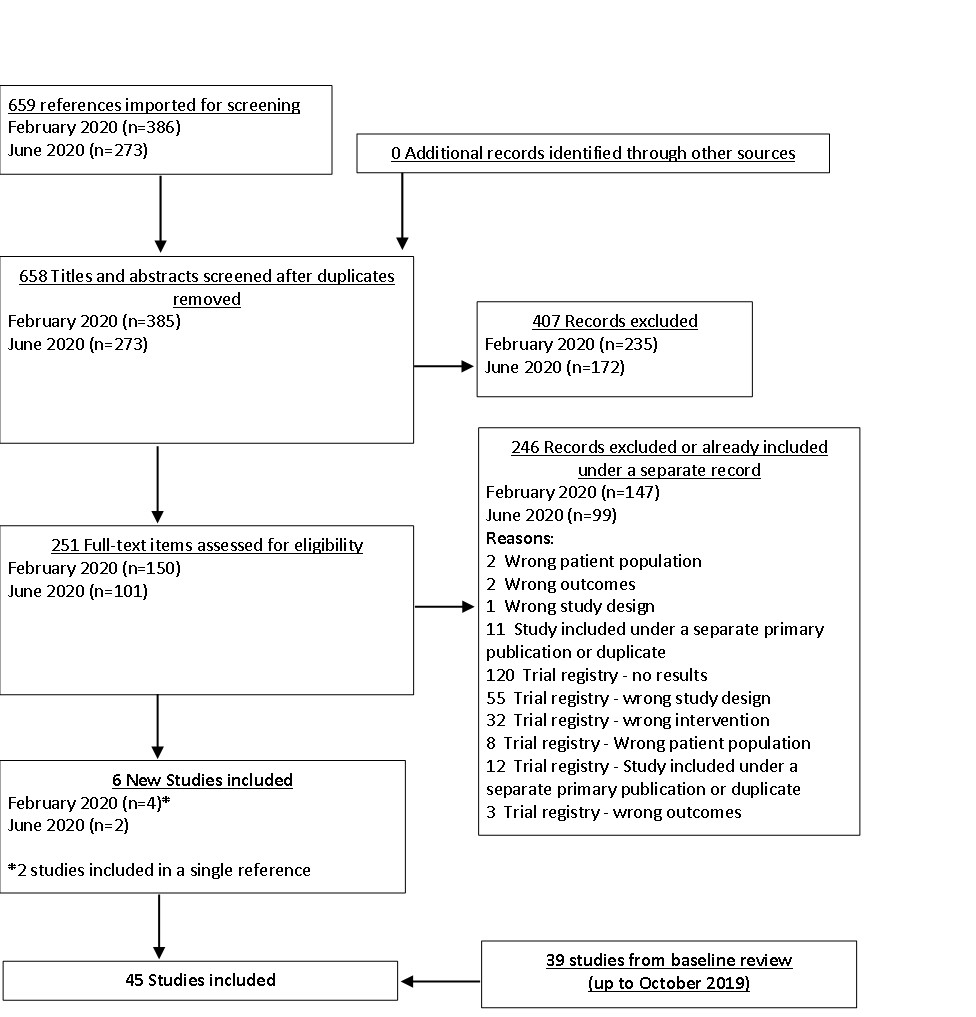 In our February 2020 search, we added four new eligible studies. There are now a total of 43 studies now included in our review. 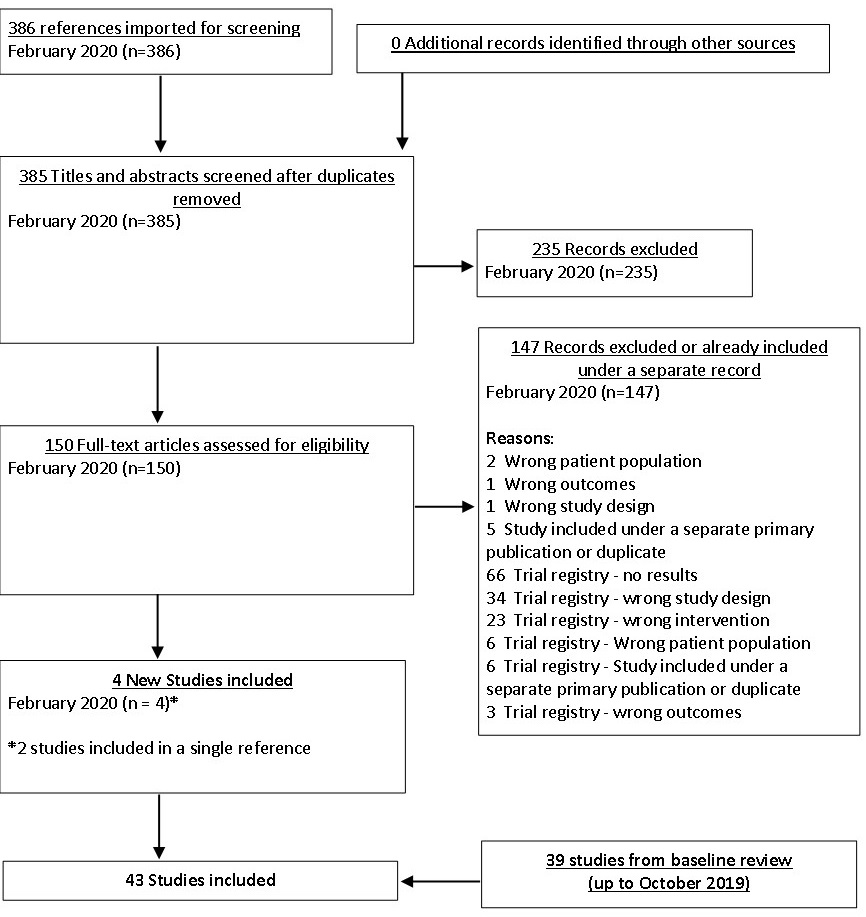 As of our baseline review, we reviewed 10,324 items and included 39 studies. 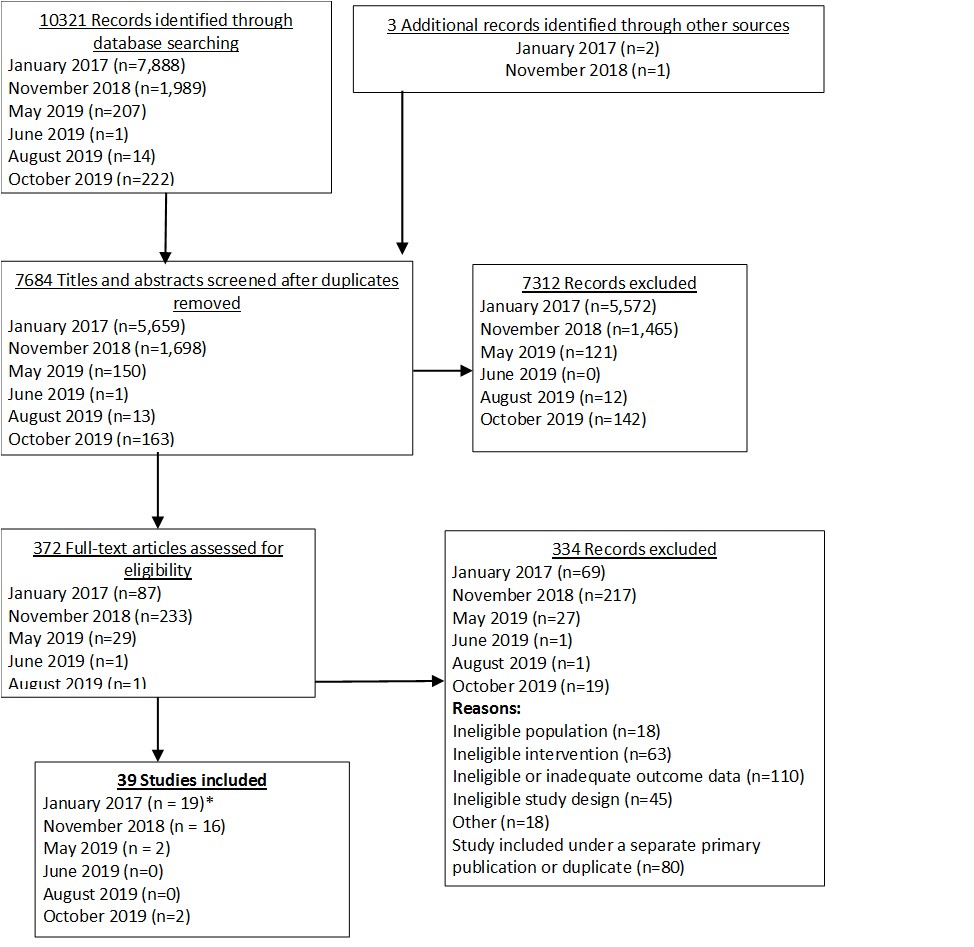 Trial characteristics, arm-level outcome data and risk of bias assessments can be downloaded as an excel file here. 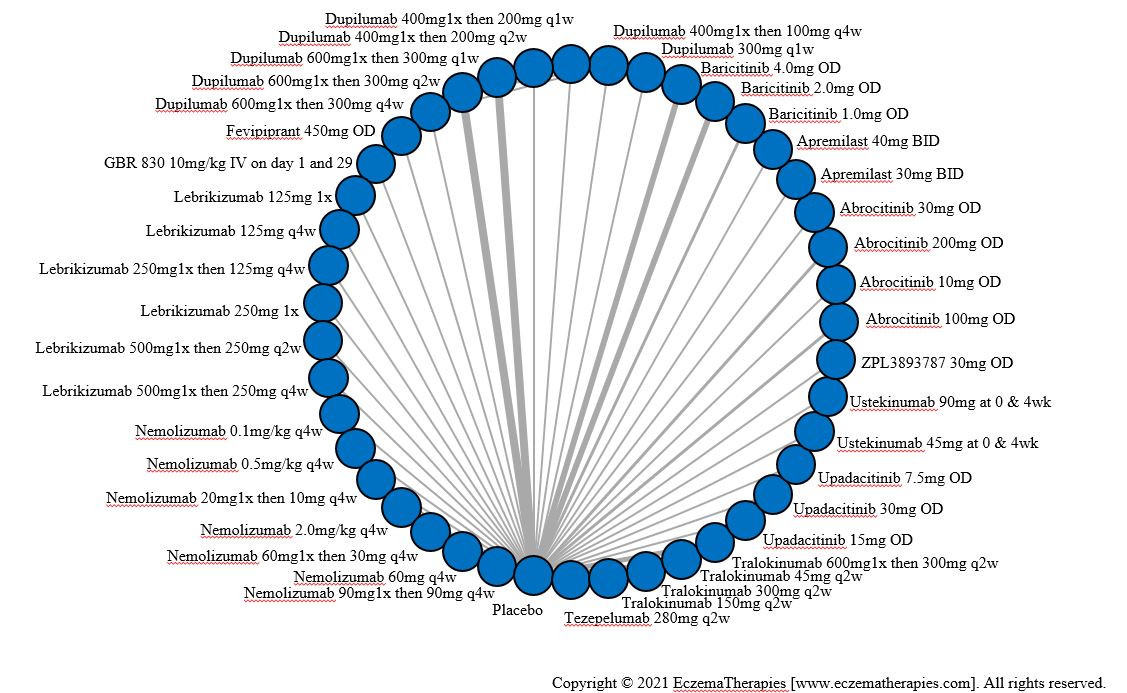 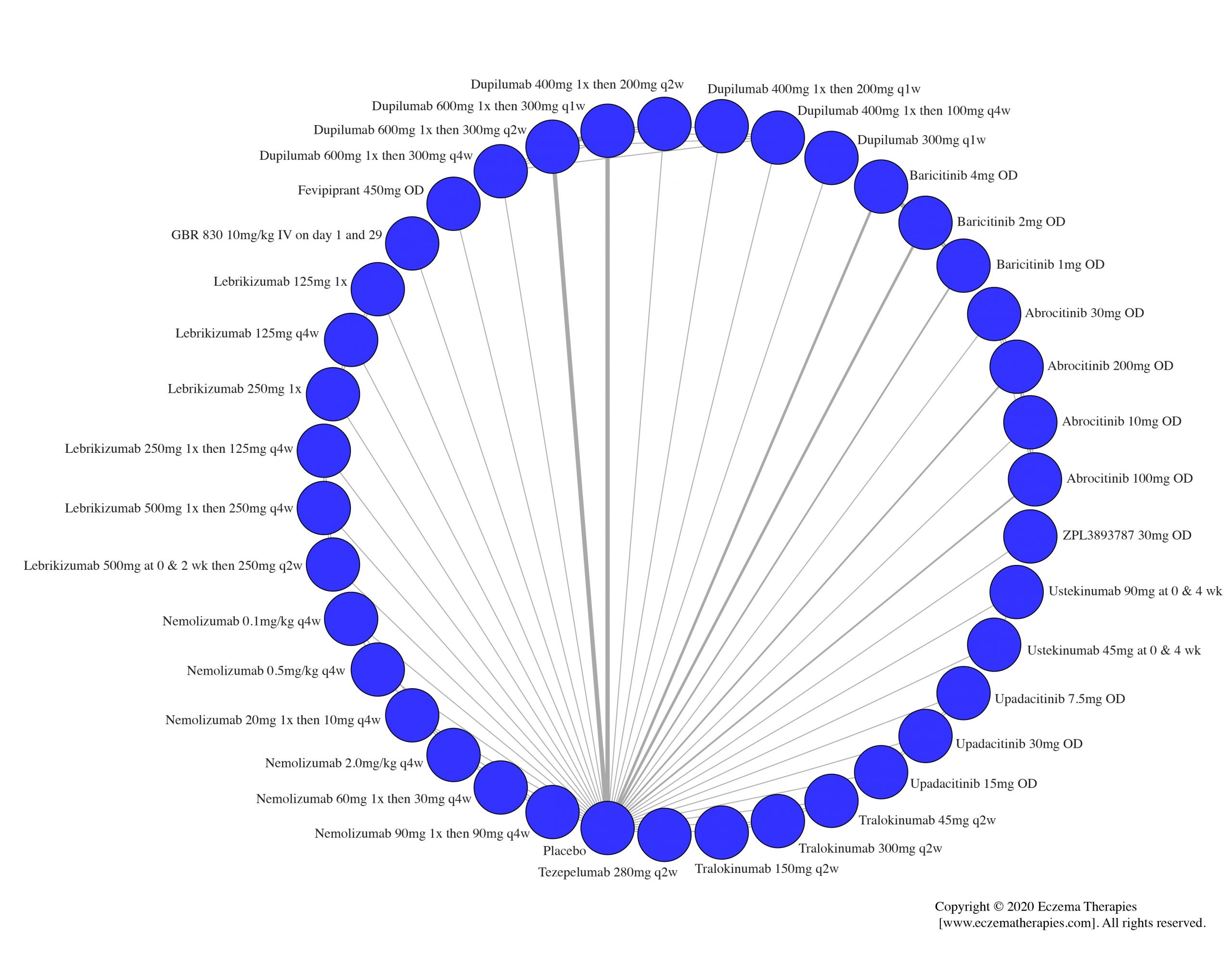 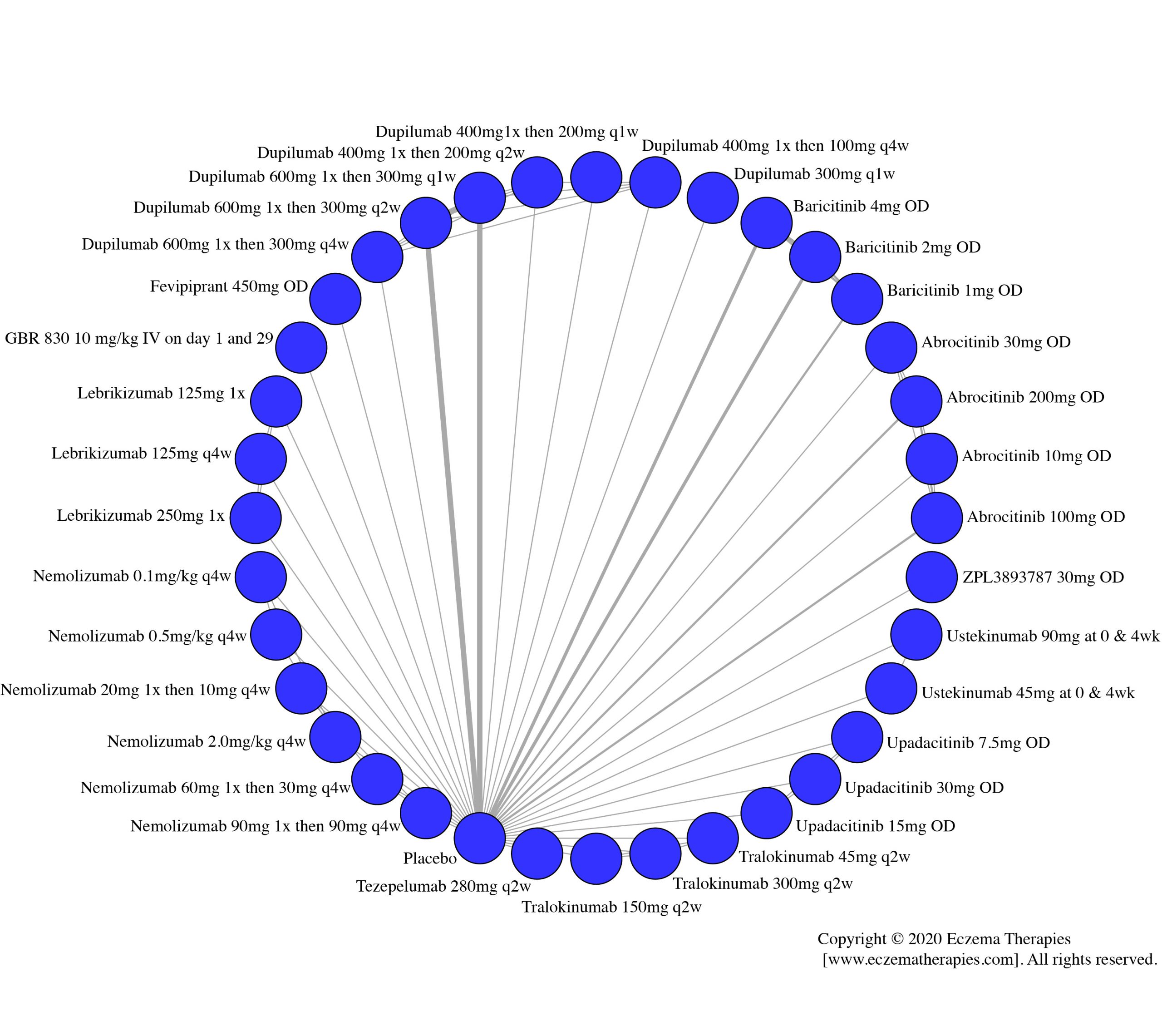 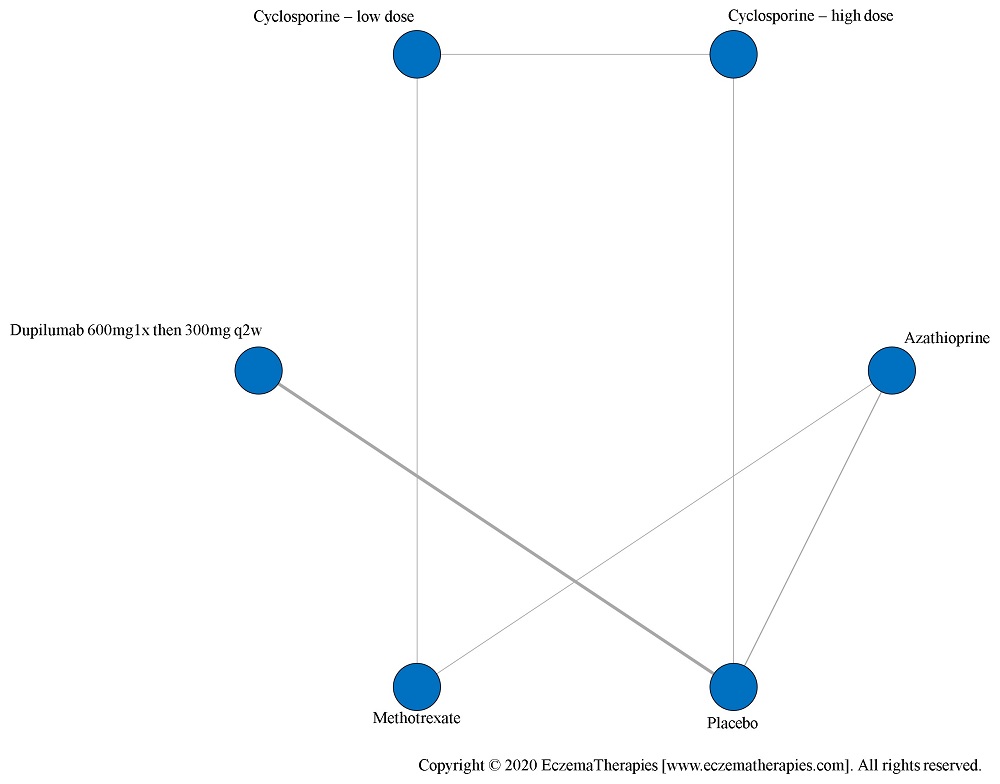 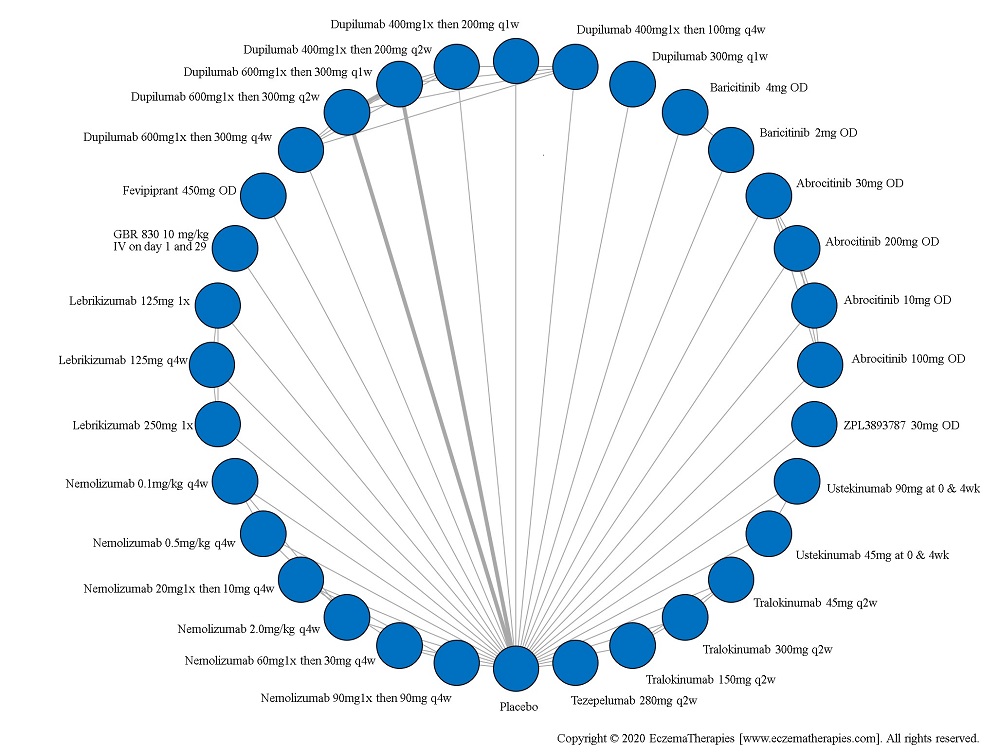 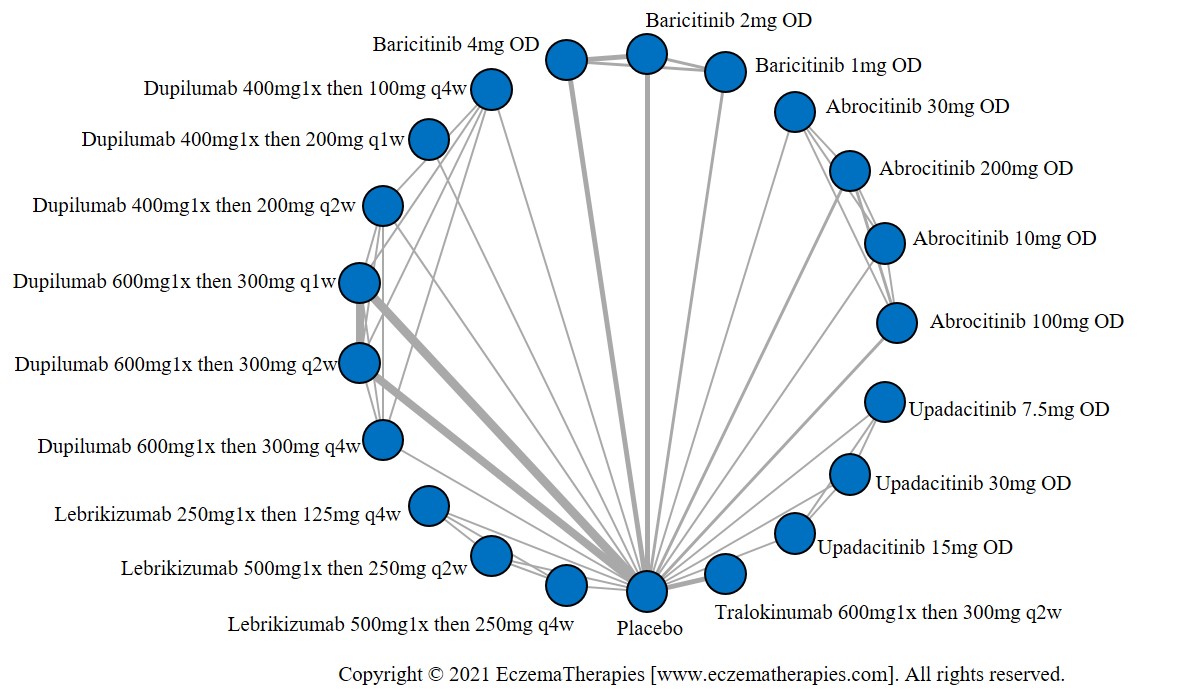 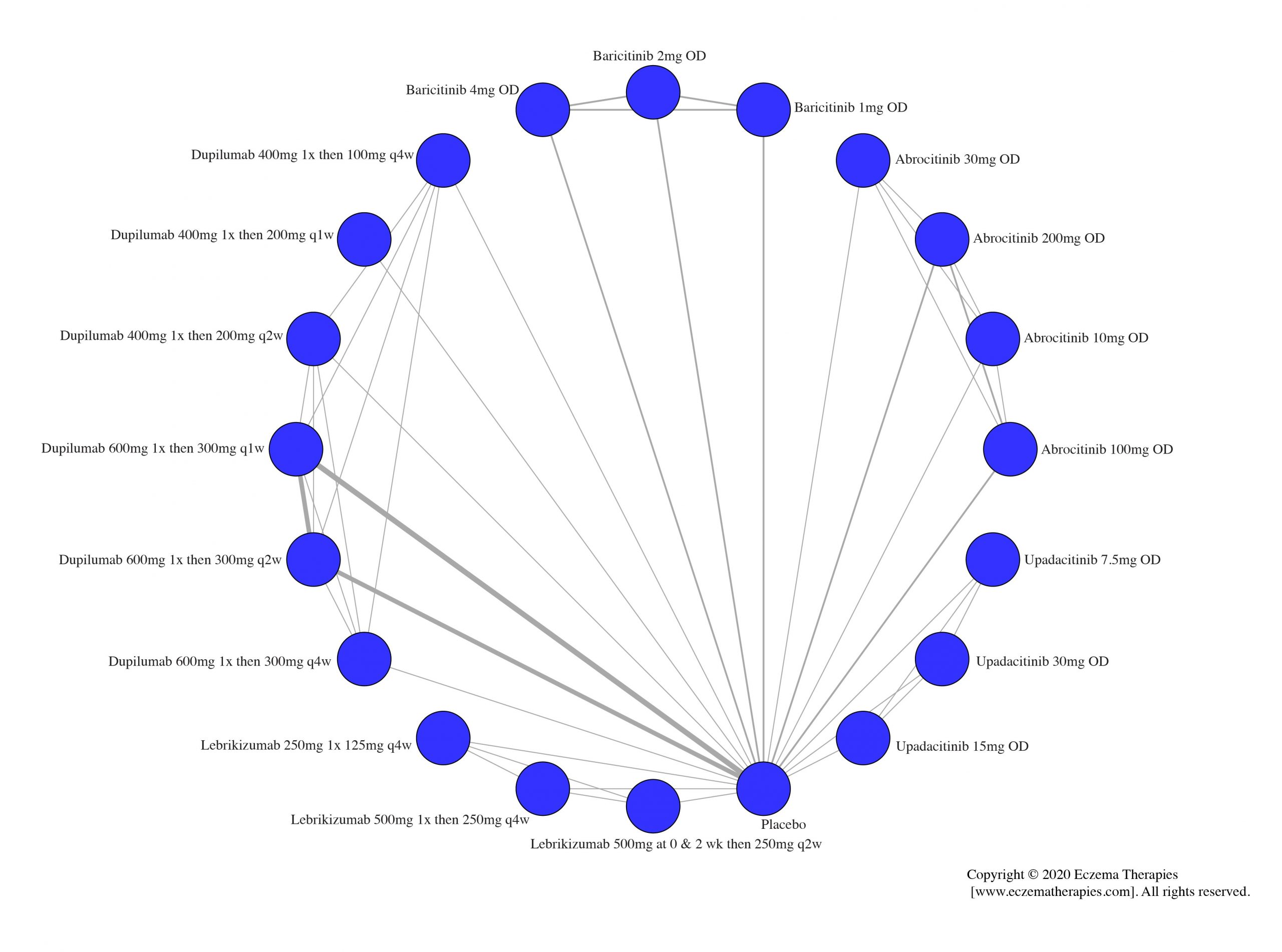 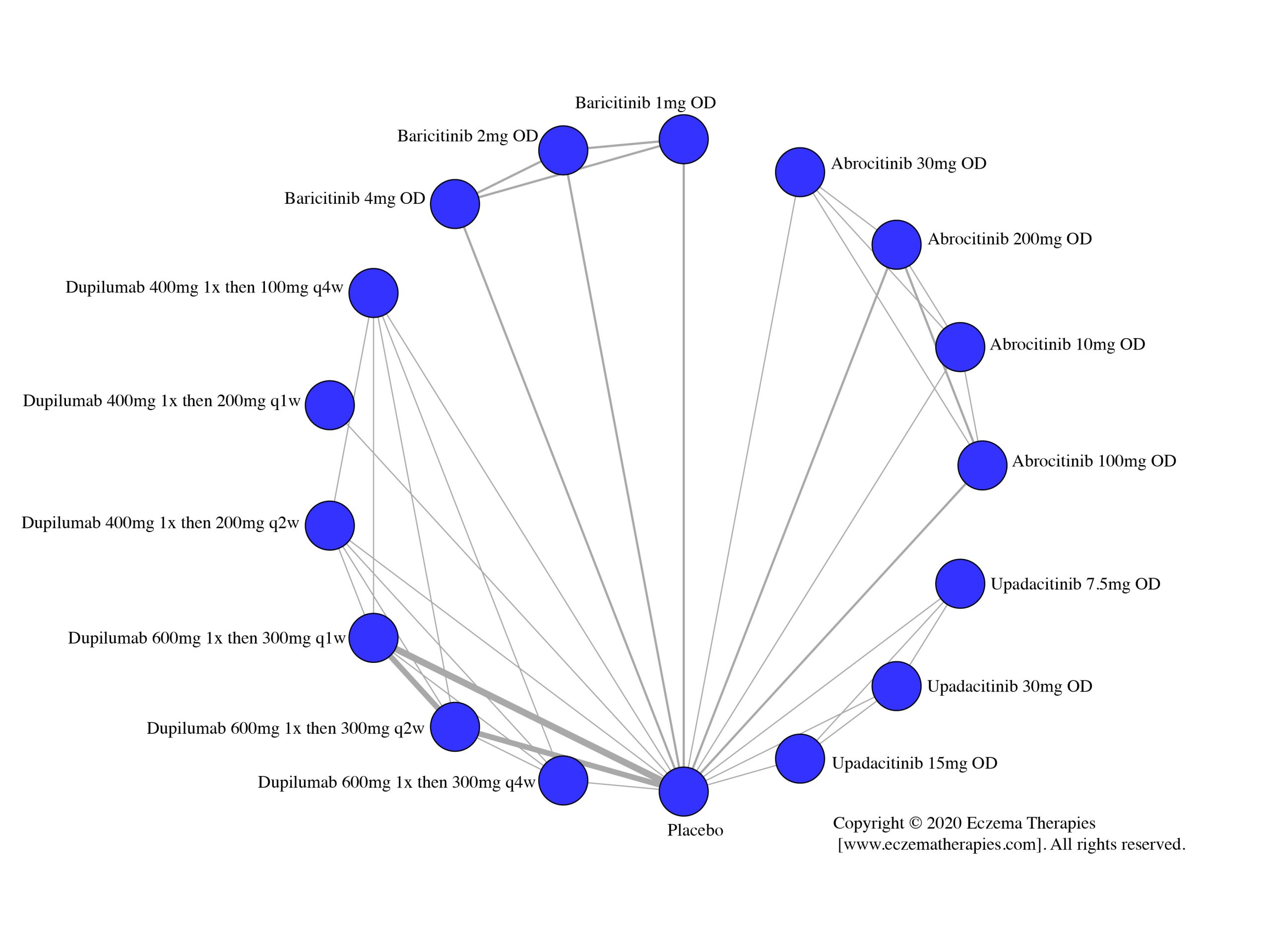 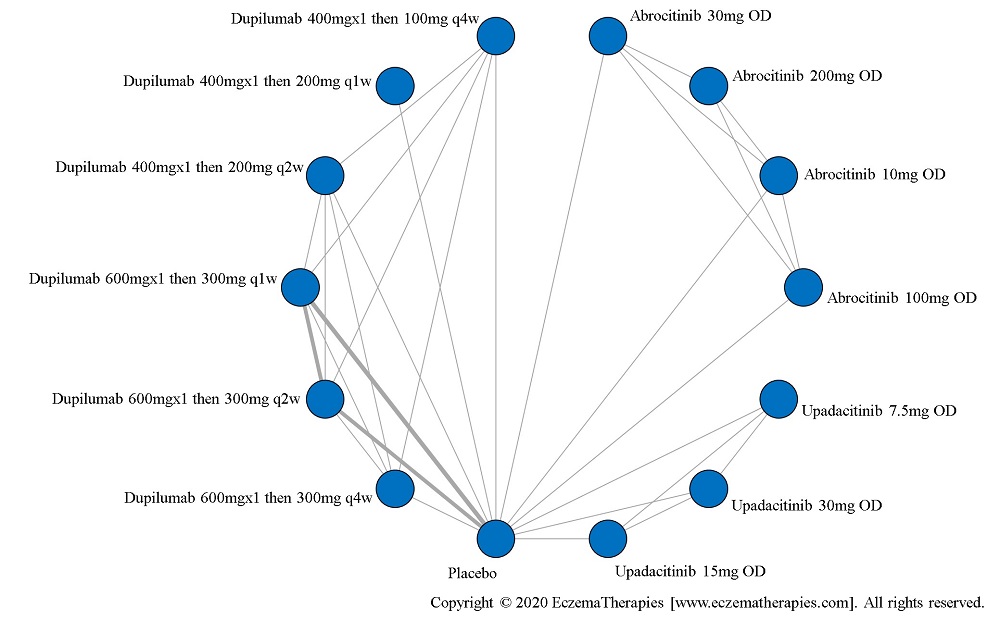 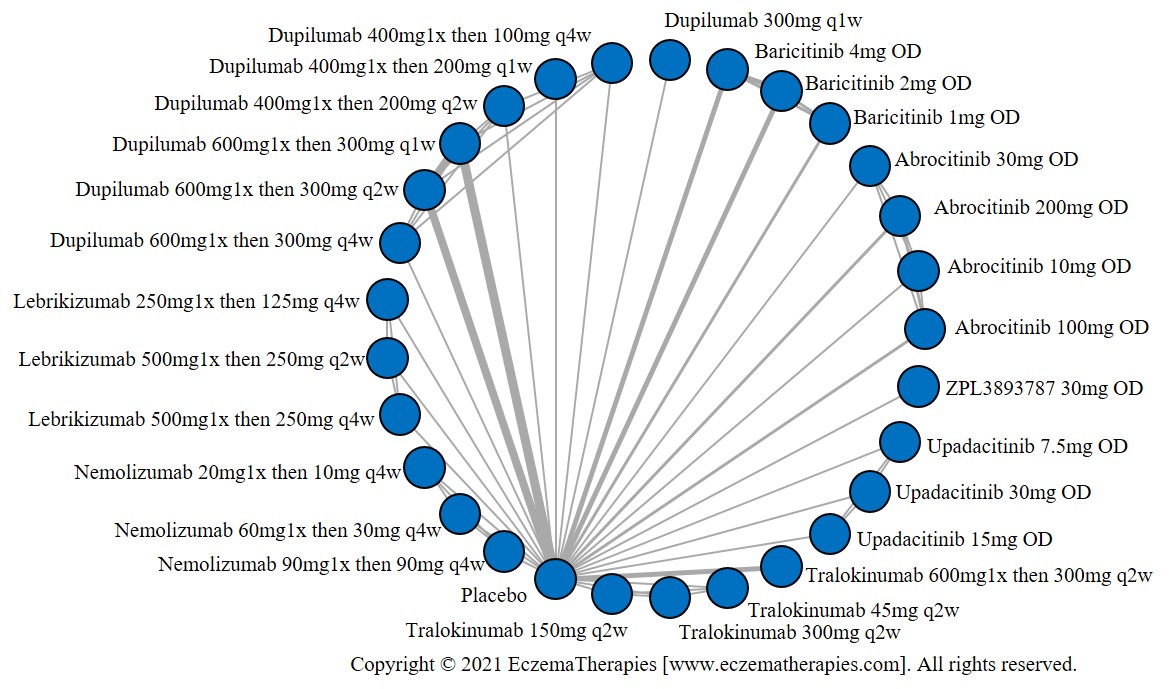 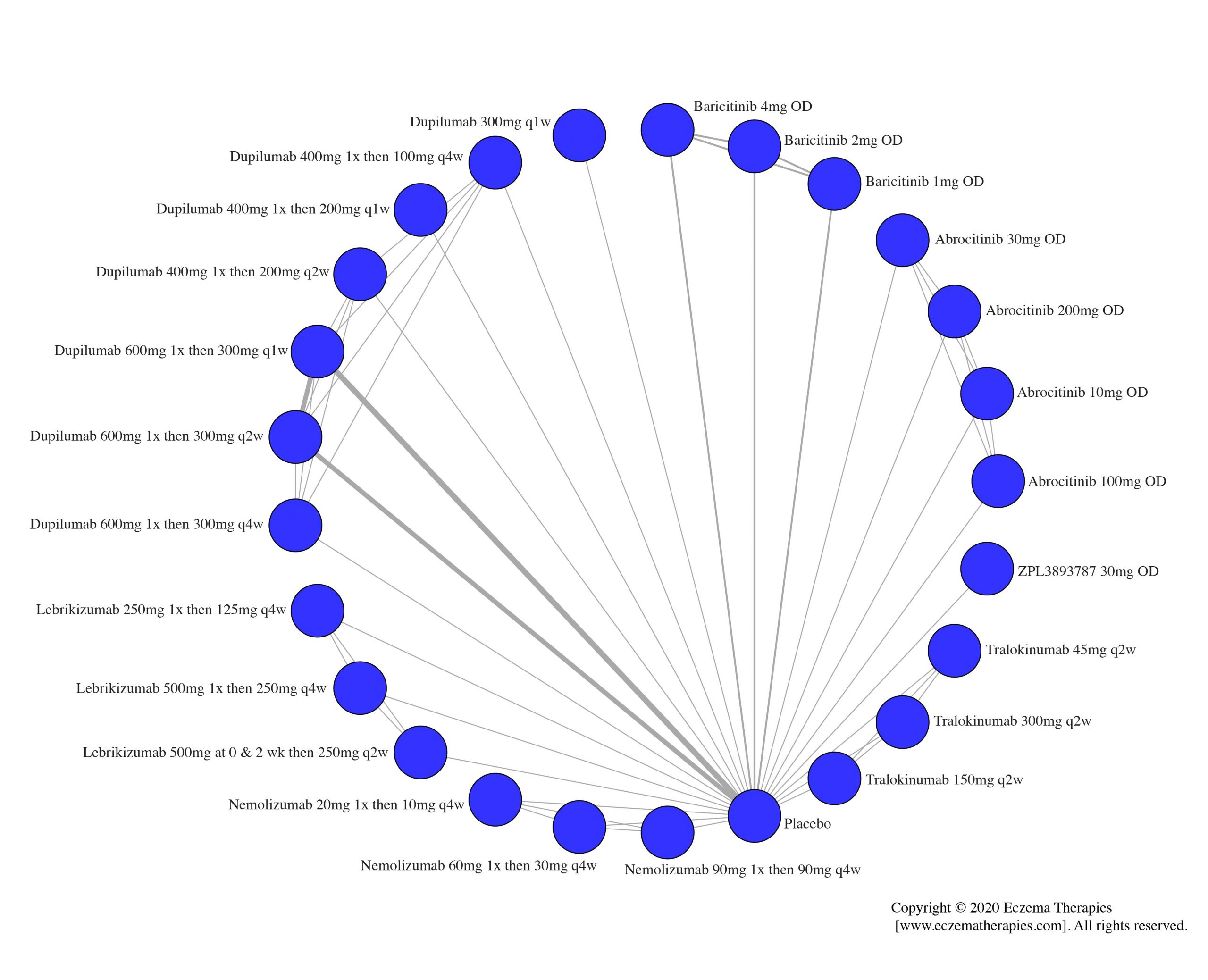 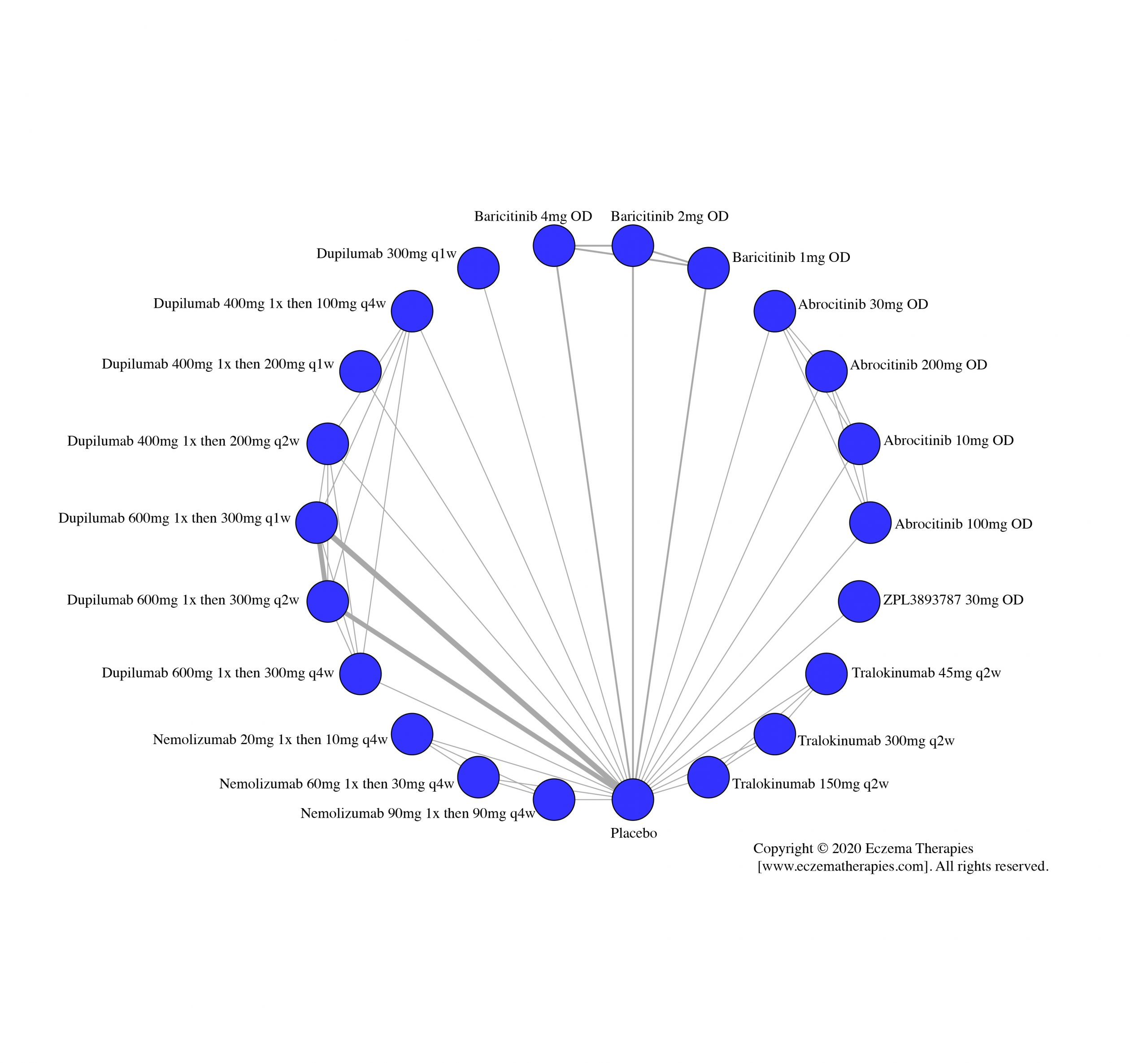 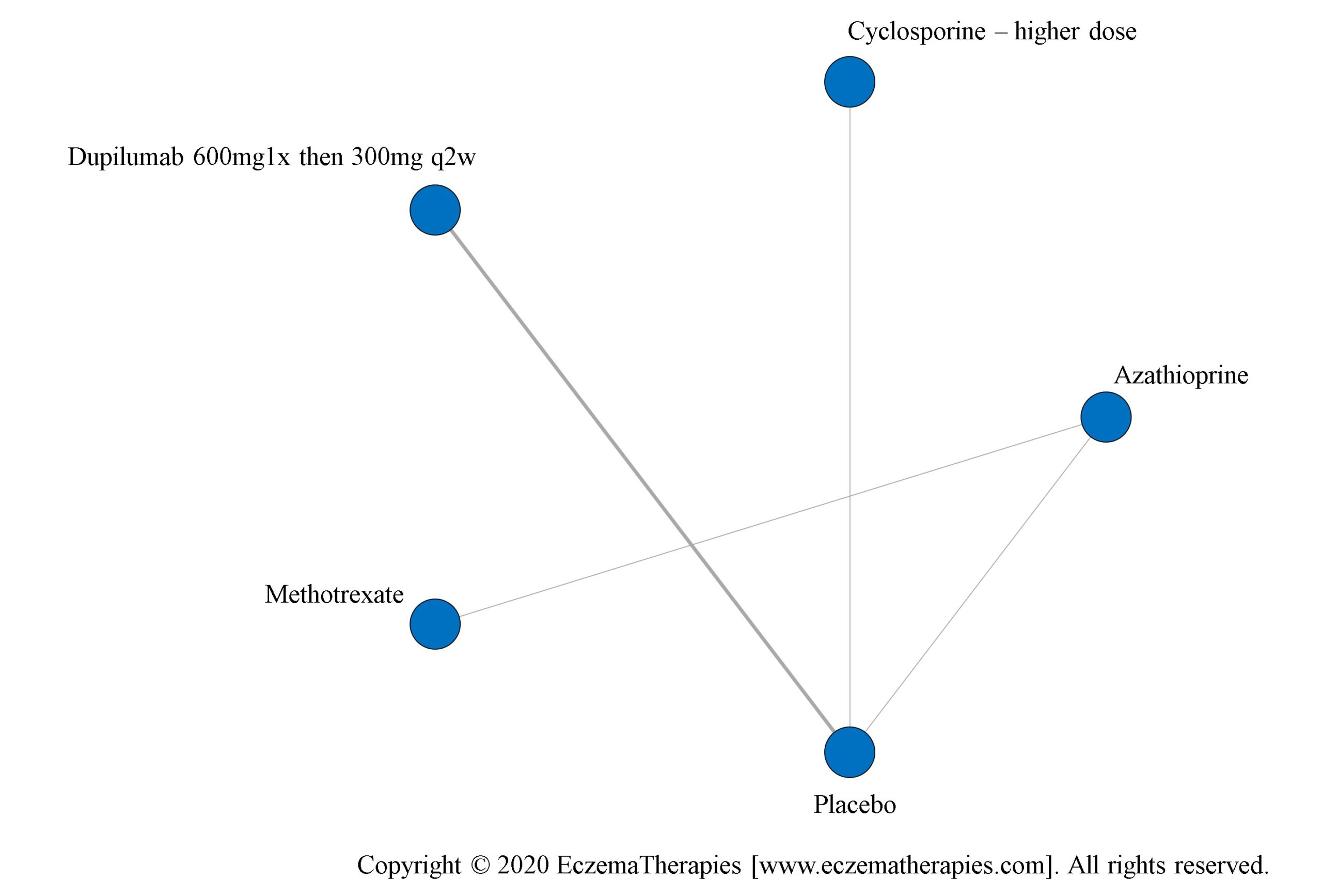 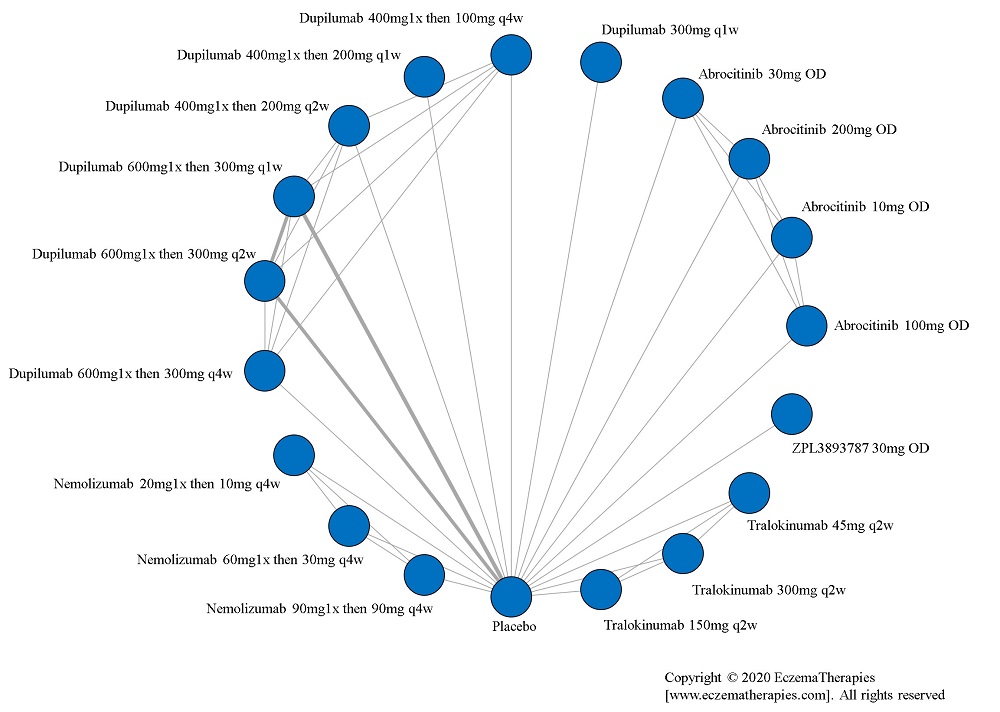 Improvement in Quality of life 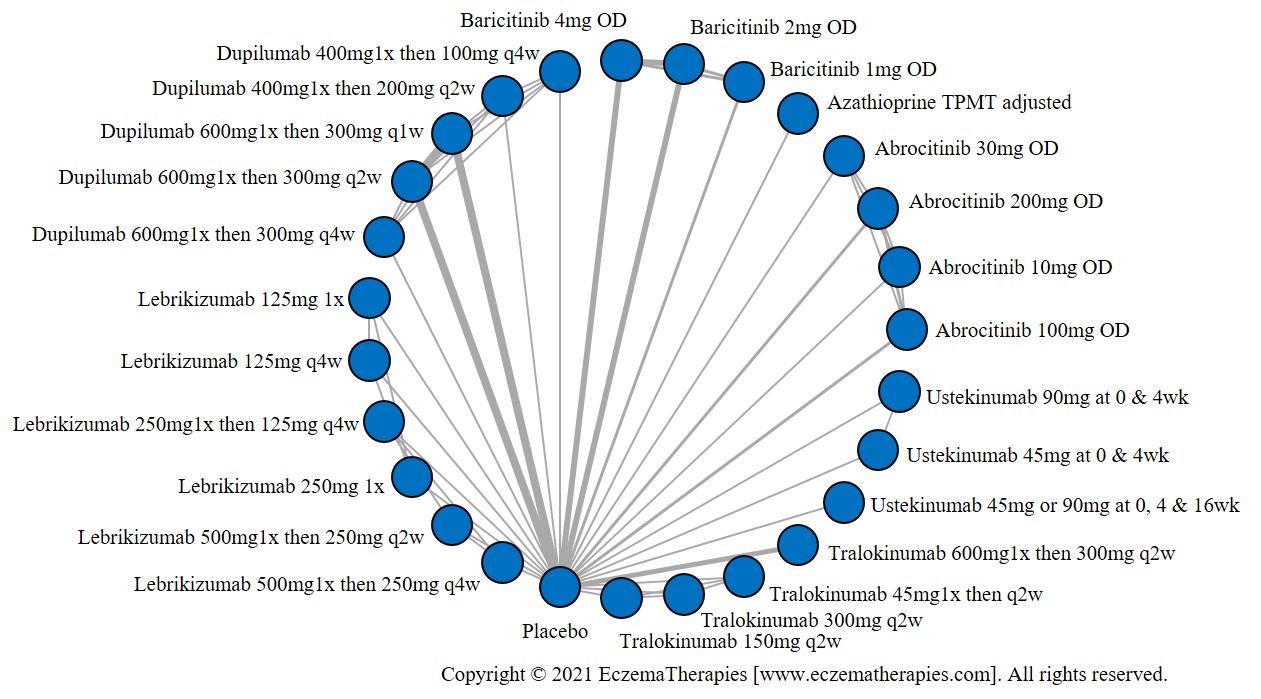 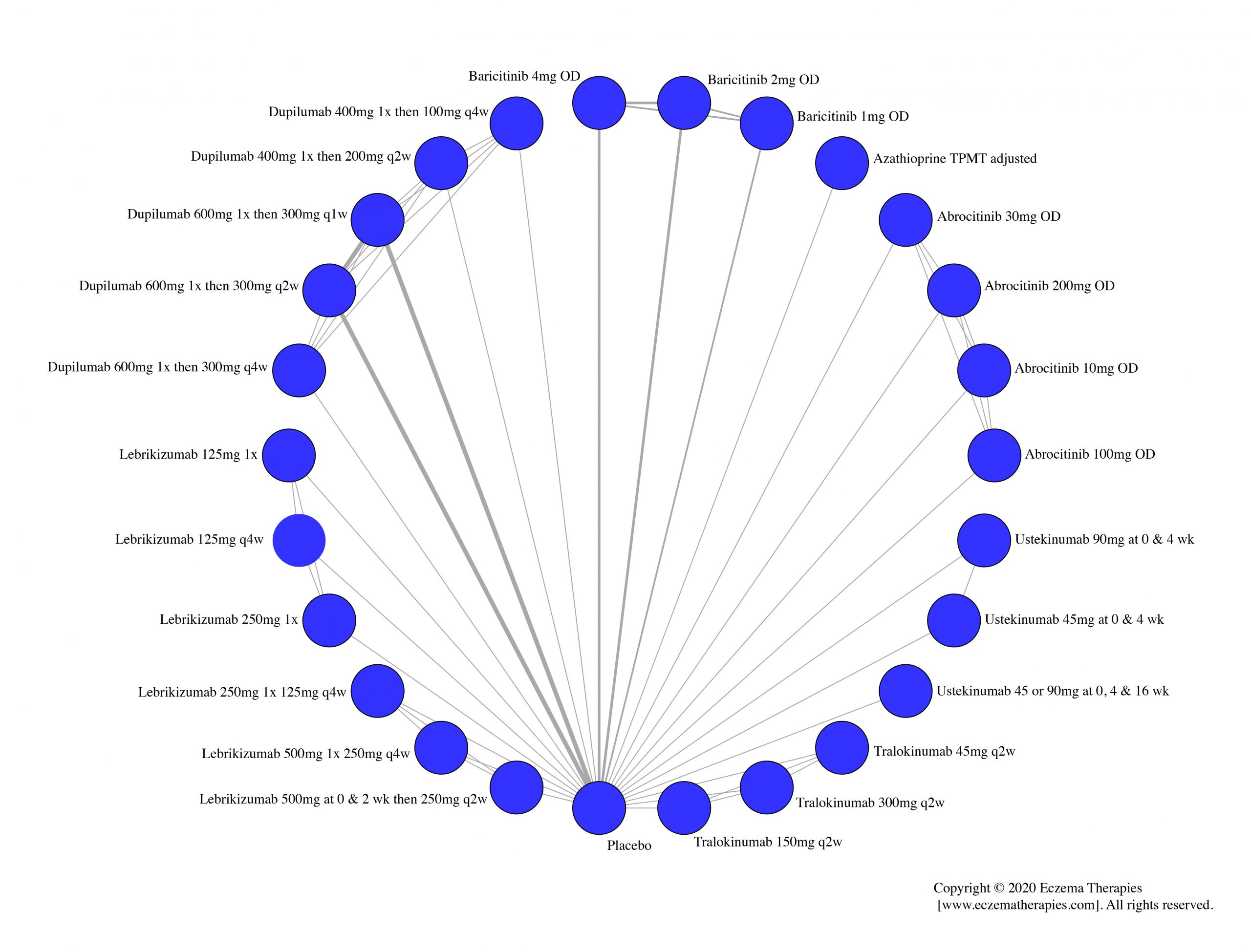 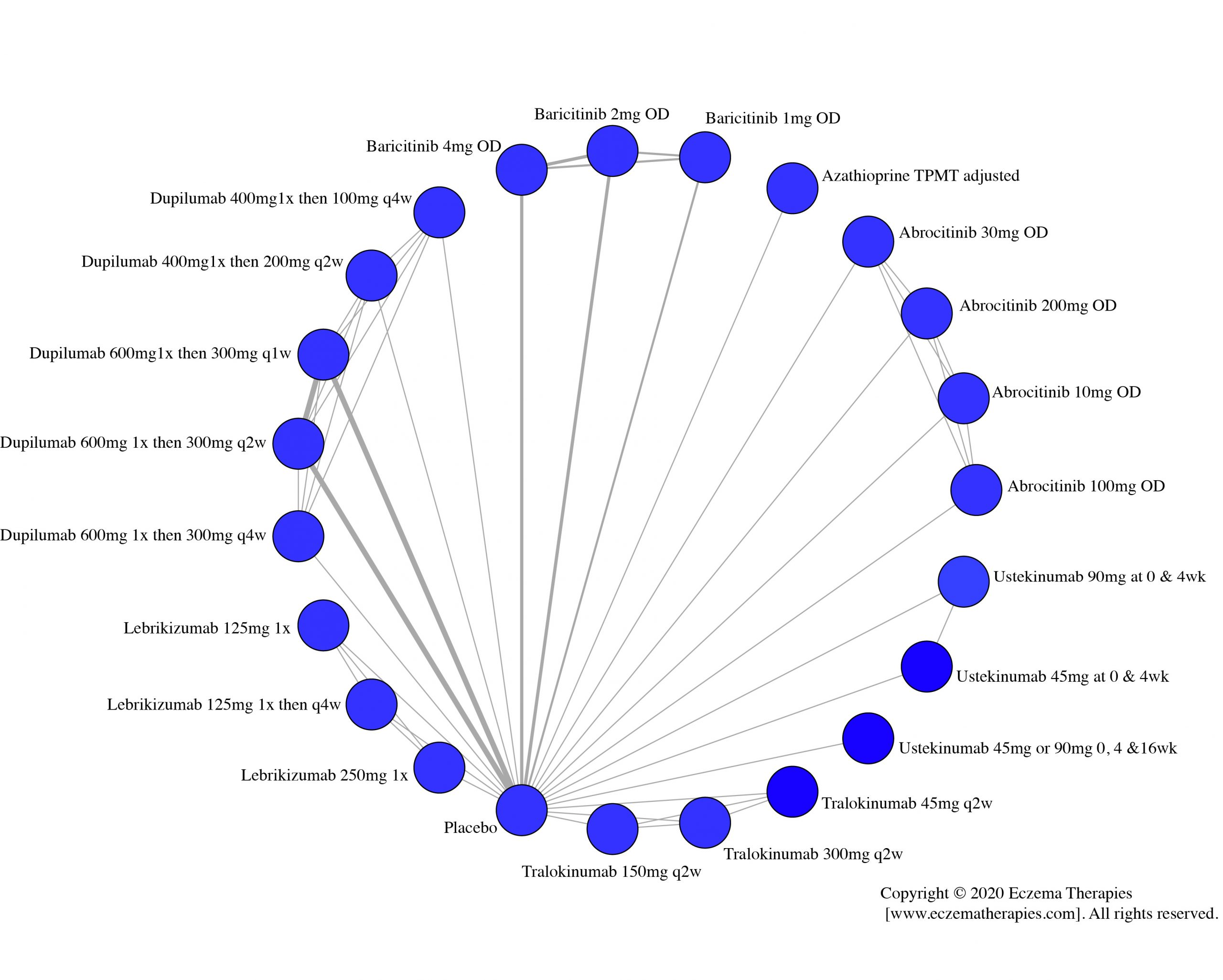 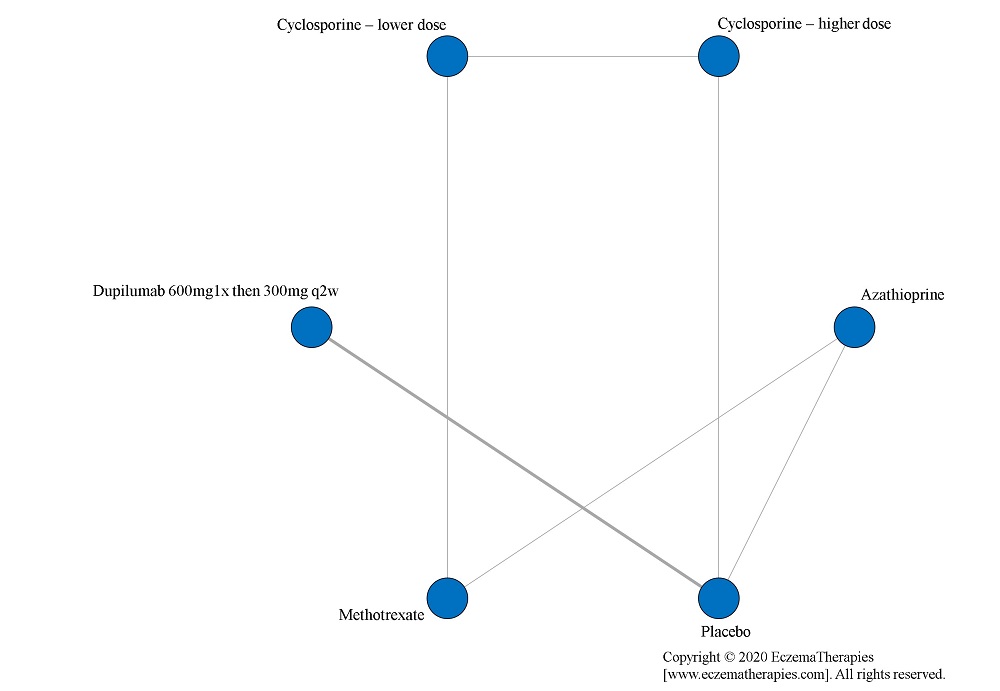 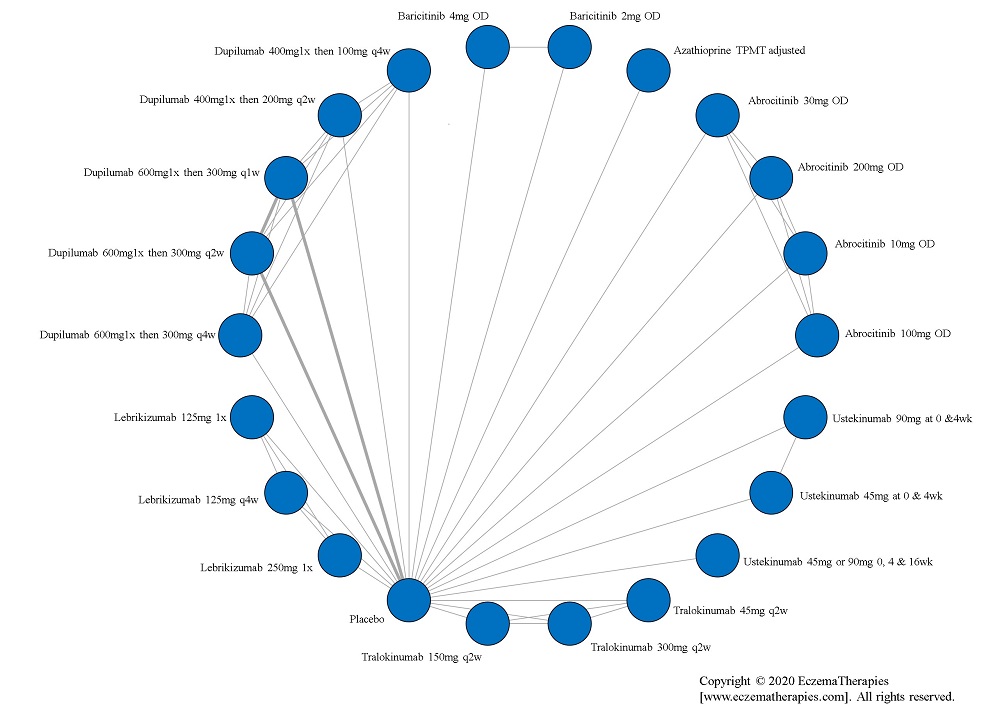 Withdrawal due to adverse events 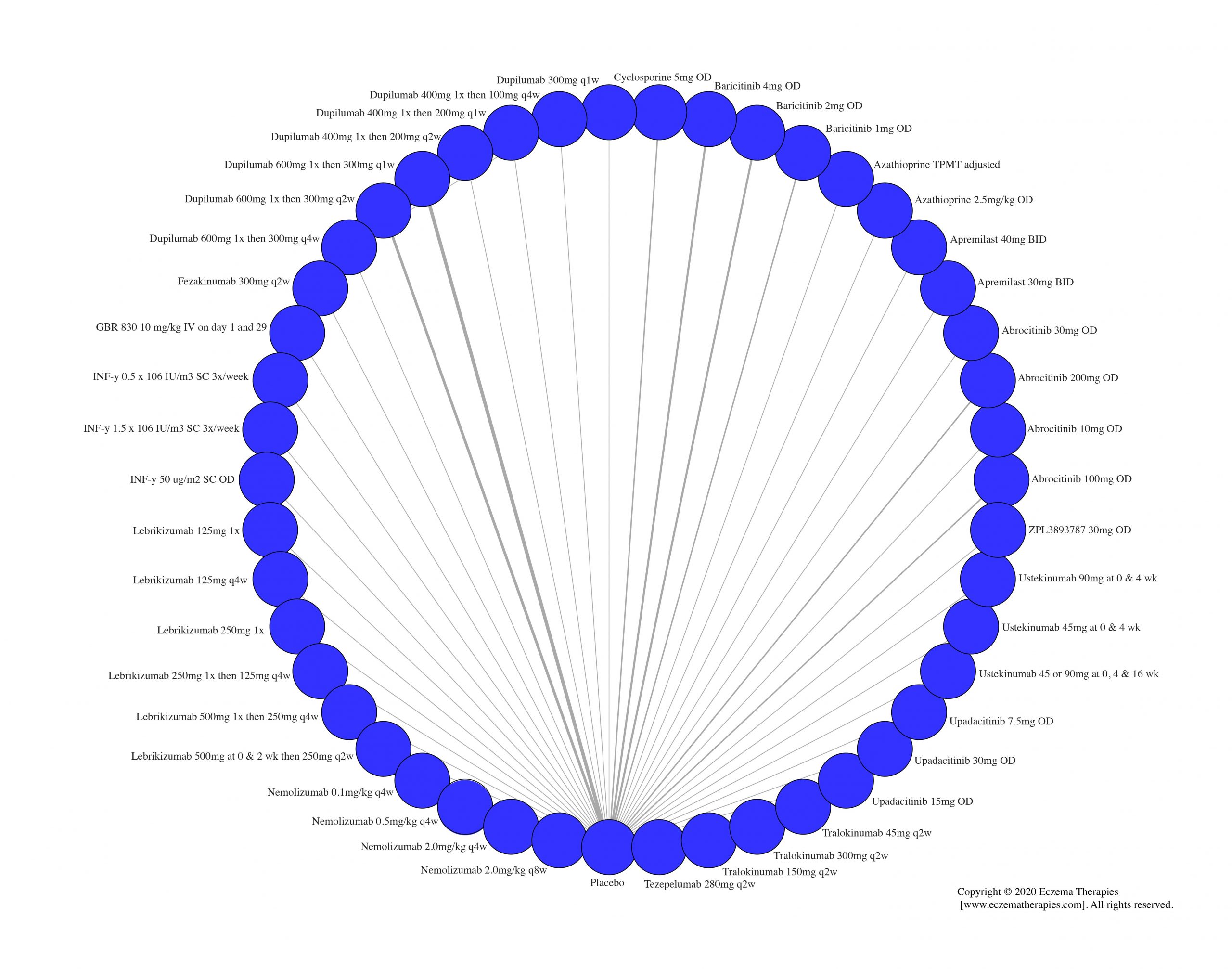 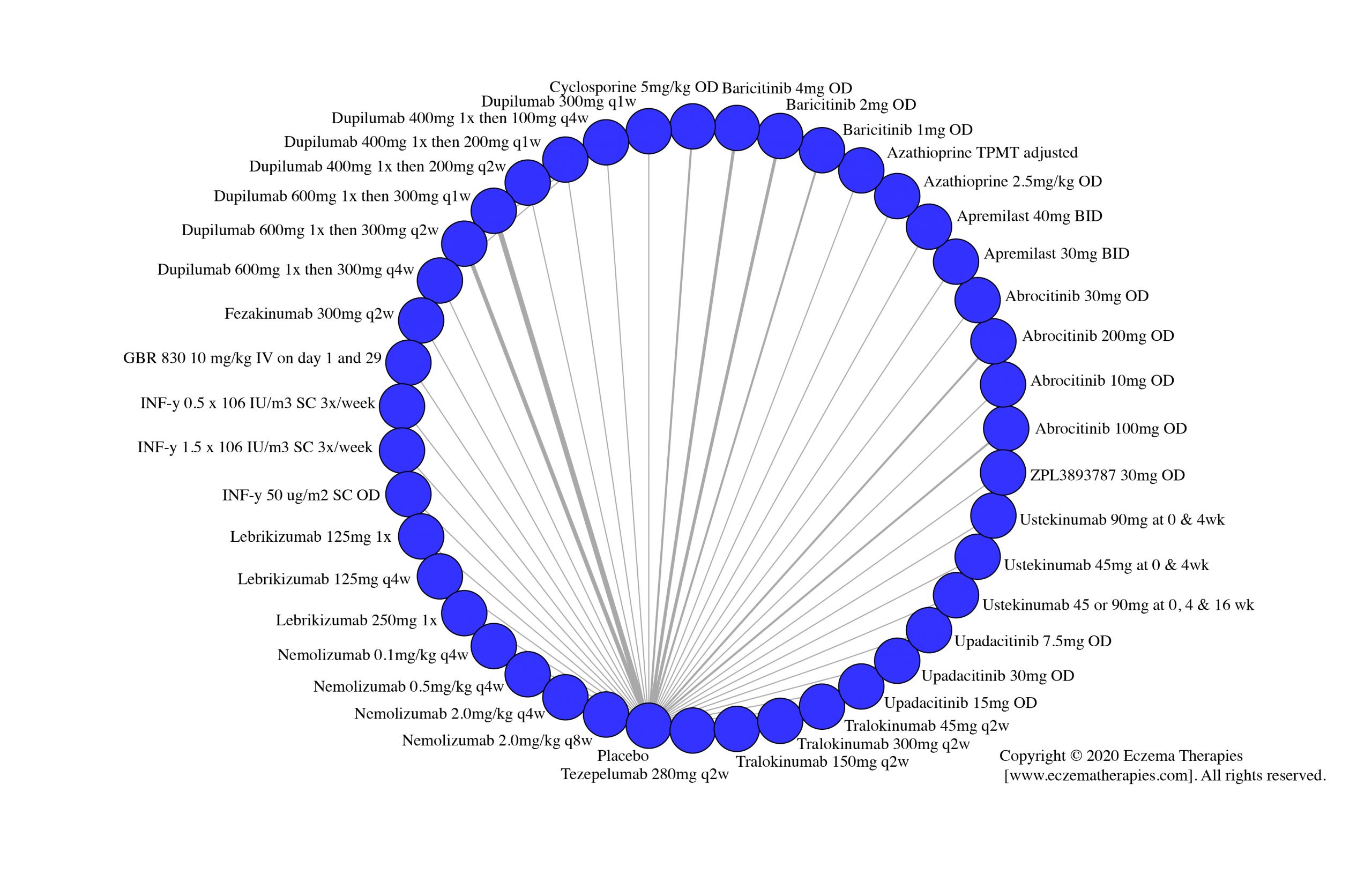 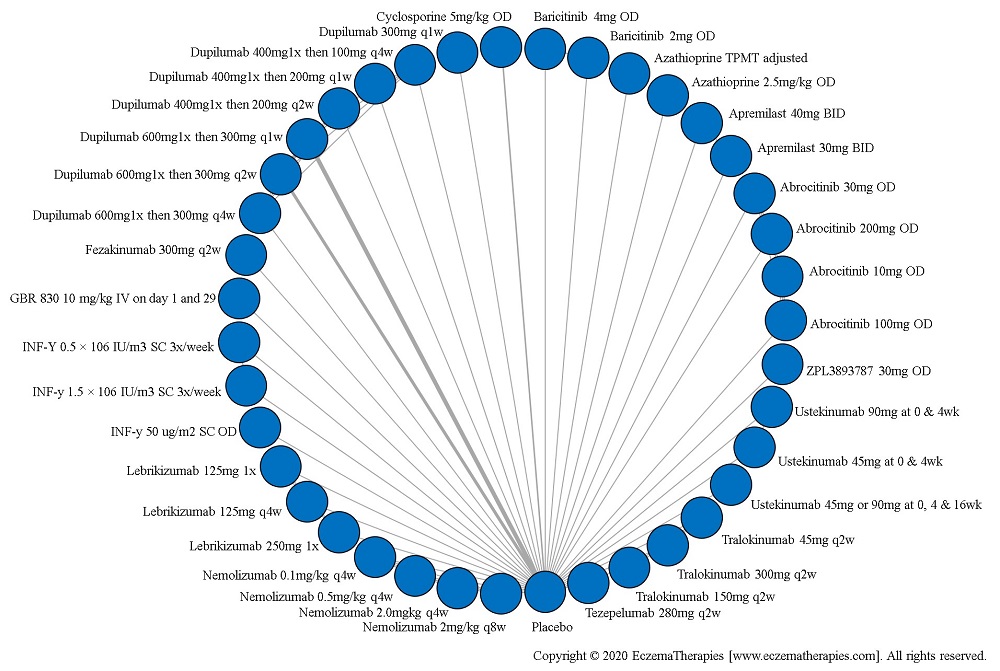 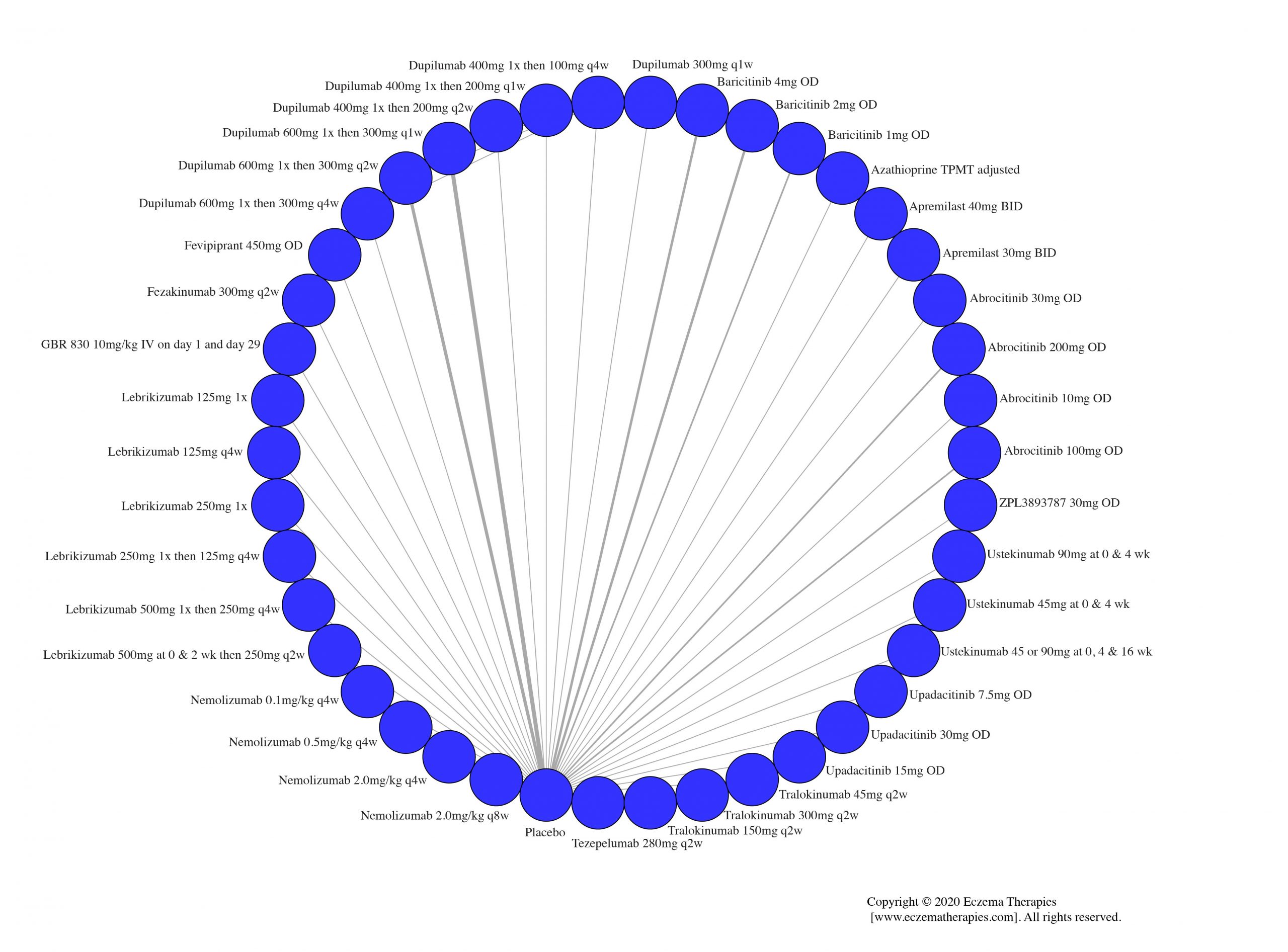 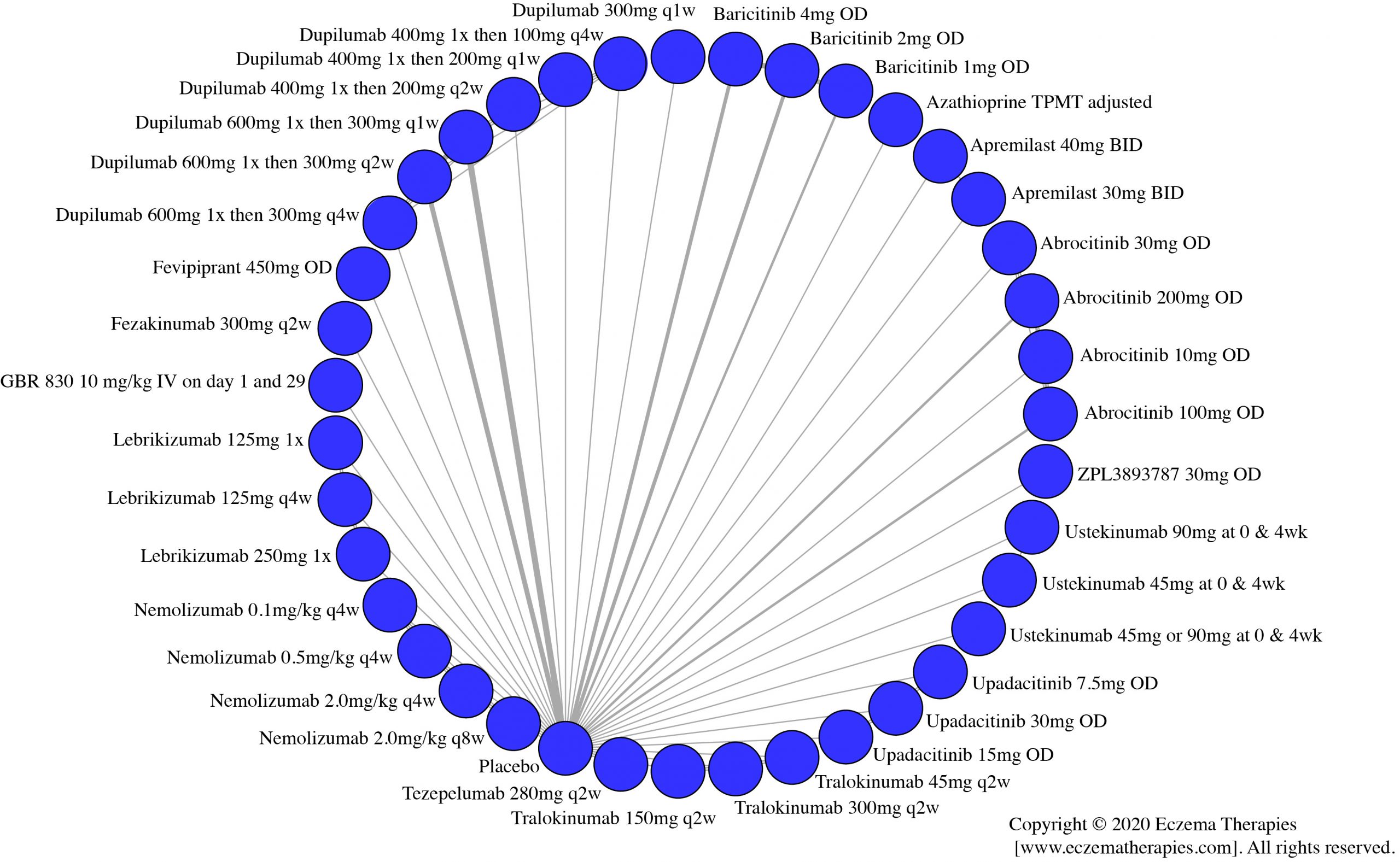 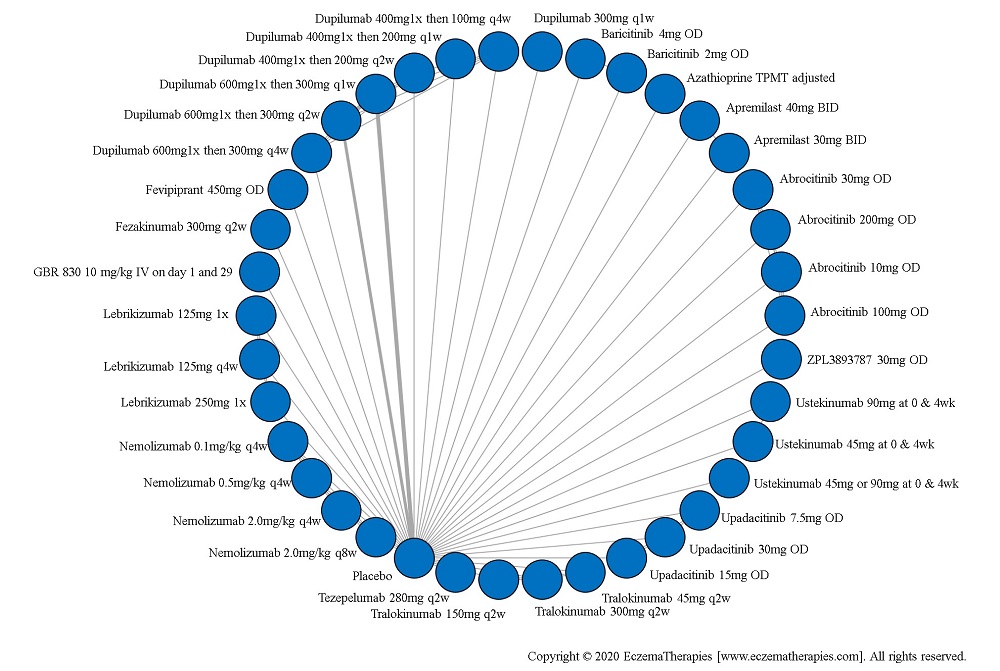